AADI named as one of Woodie's Heroes Charities for 2022! 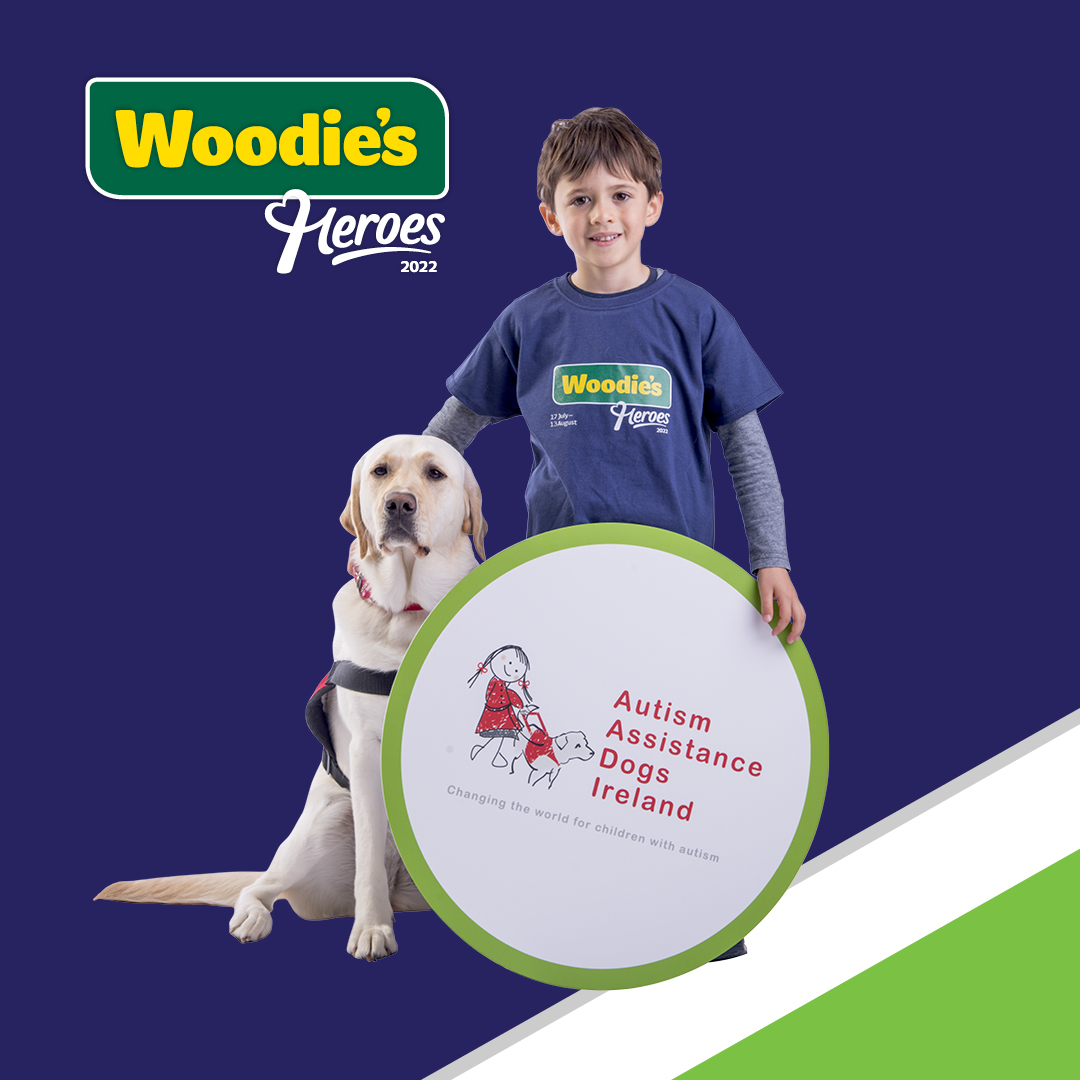 Exciting News! We are delighted to be one of the charities to benefit from this year's Woodie's Heroes Campaign.

Woodie’s Heroes is an annual charity fundraiser which supports four incredible Irish children’s charities each Summer. Their hope is to have their biggest and best year of fundraising to date so that they can help four heroic Irish charities continue their incredible work. The campaign kicked off on Sunday 17thJuly, running all the way through to Saturday 13thAugust and will support  Autism Assistance Dogs Ireland, ISPCC Childline, Down Syndrome Ireland, and Make-A-Wish Ireland. Each charity has been carefully selected using a colleague vote shared with all 1,600+ Woodie’s colleagues earlier this year.

Over the last seven years, Woodie’s Heroes has already raised €2.5 million for Irish children’s charities. In 2021, Woodie’s Heroes surpassed its target and raised over €536,000 for children’s charities. This summer, Woodie’s hope to continue to build on their fundraising efforts, thanks to the generosity of their customers and suppliers, and the support and enthusiasm of Team Woodie’s. 100% of all donations goes directly to the four charities and will be divided evenly among them.

It is now easier than ever to donate to Woodie’s Heroes:

Two teams of Woodie’s Heroes cyclists will also undertake a 2,000km cycle around the country over six days in August, putting in the hard miles for a wonderful cause. The teams will each cycle 1,000km and visit all 35 Woodie’s stores and collect their fundraising cheques for the charities.

Woodie’s CEO Declan Ronayne said: “It’s hard to believe we are back with Woodie’s Heroes for a seventh year! We understand that the current climate has been hard for the charity sector and that our chosen charities need our help. To date, Woodie’s colleagues have raised over €2.5 million for Irish children’s charities with their drive, passion and enthusiasm – I have no doubt that 2022 will be our best year yet!’

Rueben from Co Kildare is the third of three boys in a very busy household! His speech was delayed when he was younger, but as he is from a bi-lingual family, they thought that this was the reason for the delay. After a series of assessments, it was confirmed that Rueben had autism.

COVID arrived shortly after Rueben’s diagnosis, which proved really challenging. Walking was the only activity and as Rueben would often bolt, he became a flight risk. With sensory issues of getting wet, their worst fears were realised on one rainy day, when he reacted to getting wet by running out of the estate, across a busy road as a truck came towards him. It missed him by a matter of inches.

This was the moment that Rueben’s mum Sara realised autism was now a major threat to his safety and reached out to AADI to apply for an assistance dog. The waiting list had been closed since 2014 and when it opened, they were fortunate enough to be one of the 30 places allocated, all of which were filled in less than two minutes.

Eventually Indi was matched with the family and arrived November 2021. Indi has revolutionised life for Rueben and his family in so many ways: Rueben doesn’t and can’t run away now, his speech and self-esteem have improved, he has much more independence and he can even go to the shops and supermarket with his mum, which was impossible until Indi’s arrival.

The funds raised by Woodie’s Heroes will enable AADI train more dogs than ever before in 2022, expanding our Puppy Training Programme to add 25 puppies and foster families to the programme. One in 65 children has autism. It takes €22,000 and up to two years to train each autism assistance dog to the standard required. Sadly, demand vastly outstrips supply with at least 10 enquiries a week from desperate parents.

Any contribution you can make to the campaign will be gratefully received!

Here's a video showcasing the vital work that your donation will go towards: