The ‘I’ litter are now 6 weeks old and getting bigger and bolder by the day. As some of you may know, they were all named a few days ago. We delayed a little on naming them as we wanted to see how their personalities developed and boy, do they have personalities!

Irwin particularly likes to ‘sing the song of his people’ and is the most vocal of the little superheroes. Inga is the bravest of the bunch and gave Lynn a mini heart attack the other day when she managed to climb up on top of a crate, egged on by one of her brothers we suspect! She has caused a few sleepless nights with her adventures, particularly when she can’t sleep herself and gets into mischief while the others are snoring away. Ice is an independant little man and is happy to play on his own or with the humans instead of his siblings. I’m sure we can all understand his need for a little space right now. 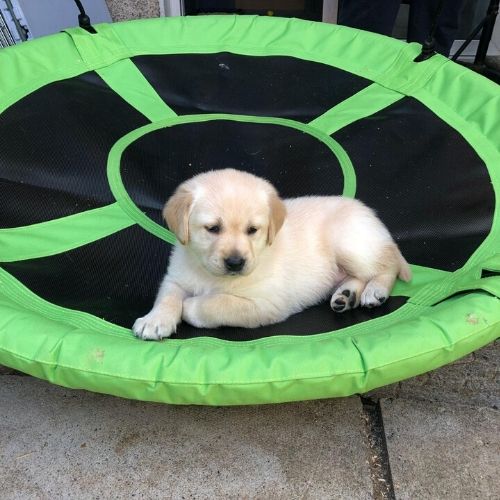 All the puppies have ventured outside by now and are loving their new toys - especially the swing. Like any small people learning about the world around them, they like to get stuck into things and investigate which is true of Iris who decided to ‘help’ Lynn one morning when she was cleaning out the litter tray! All the puppies are getting very good at their house training and going ‘busy, busy’ (toilet) in the correct spot. It’s hard work to house train 9 six week old puppies but they are doing very well. Their next big adventure will be Michael’s now famous obstacle course in the front garden. We don’t take bets on them but those of you missing some sporting action might enjoy the distraction. We will be sure to get some video action to share with you.

For most houses, dinner time is one of the busiest times of the day and Lynn and Michael’s house is no different. When the puppies were getting used to solid food, as well as eating their dinner they also liked to walk in it! They were set a few challenges at feeding time like eating their dinner around some kitchen utensils in a tray which helps develop their resilience and get them used to different noises. They have now moved on to a bowl each which gives the humans a challenge to line up 9 puppy bowls and 3 adult dog bowls as well as feeding all the humans! 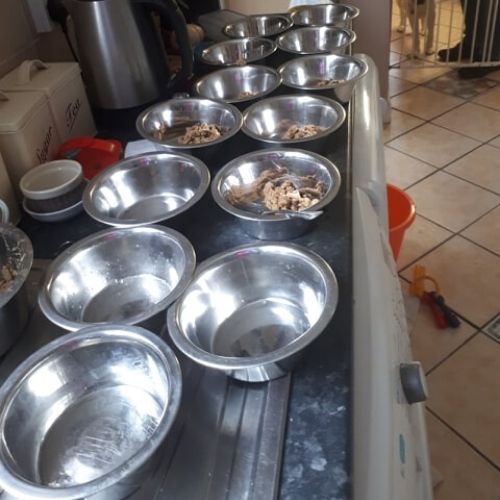 To start on their journey to be superhero assistance dogs, each pup had a trying on session with their little AADI ‘puppy in training’ jacket. To say they were cute is an understatement and each of them took the new experience in their stride. They have also done some short car trips in preparation for getting their vaccinations next week at the vets and then onwards to their new foster homes.